What is Moissanite, Anyway?

Naturally-occurring silicon carbide is extremely rare – on Earth, that is. But out in deep space, it’s quite common, and small quantities were shipped to Earth via meteor. So it came to be that a French researcher found traces of silicon carbide in the crater where a huge meteorite struck the Earth in what is now Arizona 50,000 years ago, give or take a few decades.

Moissanite is a created jewel that was born from a rare geological find made more than 110 years ago. Discovered in 1893 by French scientist, Dr. Henri Moissan (who later became a Nobel Prize winner), moissanite can trace its origins to particles found in a meteor crater located in Arizona. These natural moissanite crystals were too scarce and tiny to set into jewelry. 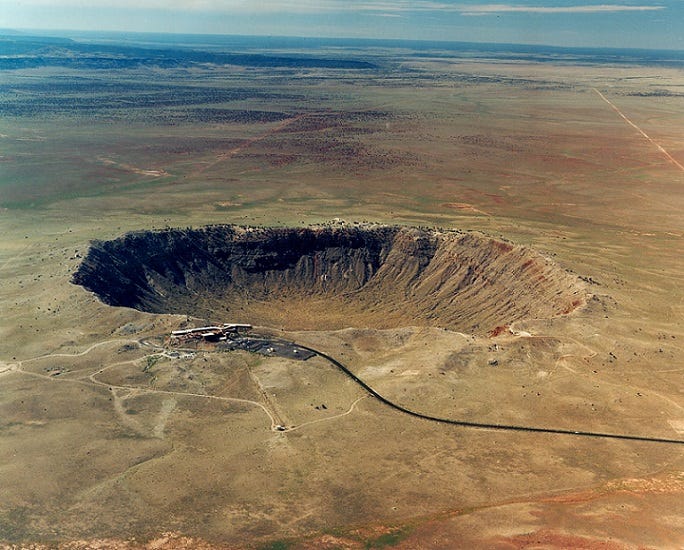 The crater in Arizona where moissanite was first discovered

At first the gem was mistaken for diamond due to its hardness and brilliant reflectiveness, but several years later, after painstaking testing, it was identified as silicon carbide. The gentleman who unearthed this naturally-occurring silicon carbide is also the man who correctly categorized it in 1904: Henri Moissan, a French chemist who went on to win the Nobel Prize in Chemistry. Moissan’s efforts led to the mineral being named moissanite in his honor by a leading gemologist from Tiffany & Co.

At first moissanite’s similarities to diamonds had Moissan assuming it was diamond. But the fact is, moissanite has a refractive index 2.65-2.69, which is gem-geek speak that means its brilliance actually exceeds that of diamond. And its dispersion (the way a gem takes white light and breaks it into spectral colors) is 2.4 times higher than diamond. The result is that moissanite gems have flash, fire and brilliance that blows away other gemstones. 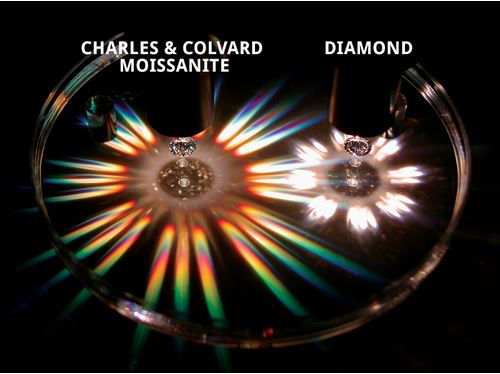 The unrivaled fire for which moissanite is famous

The optical properties of moissanite inflamed research into techniques to purify and improve silicon carbide production. Fast forward a hundred years to 1998, when Charles & Colvard Created Moissanite® was introduced to the world, the result of a patented process developed in the labs of Charles & Colvard® in Research Triangle Park in North Carolina.

In the culmination of a century of research, moissanite has attained a level of purity and refinement that exceeds that of the most sought-after gems in the world; it is embraced by consumers, artisans, jewelers, and anyone who enjoys the brilliance and fire of glittering gems.