A Guide to Wedding Bands

Wedding season is in full swing, and many brides-to-be are picking out the bands that will adorn their ring fingers for many years to come. Since choosing a wedding band is such a big decision, let’s go through some of the most popular options!

This style is traditional and timeless.  A simple band of precious metal has been a popular wedding ring choice for centuries, and remains a favorite even today. Common metal choices include yellow & white gold, platinum, palladium, titanium, and silver. Rings that feature more than one metal, such as two-toned rings, are also growing in popularity. 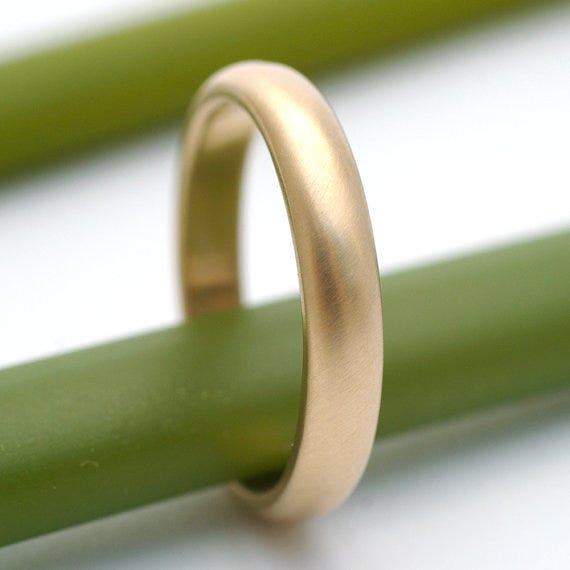 A timeless 14k gold wedding ring by KyleAnneMetals on Etsy

A metal wedding band can be as traditional or as contemporary as you’d like. While basic metal bands are the most common, rings featuring unique textures and patterns are also available. The sky is the limit! You can even add a few moissanite accent stones to a classic metal band (in fact, we’d highly recommend it). 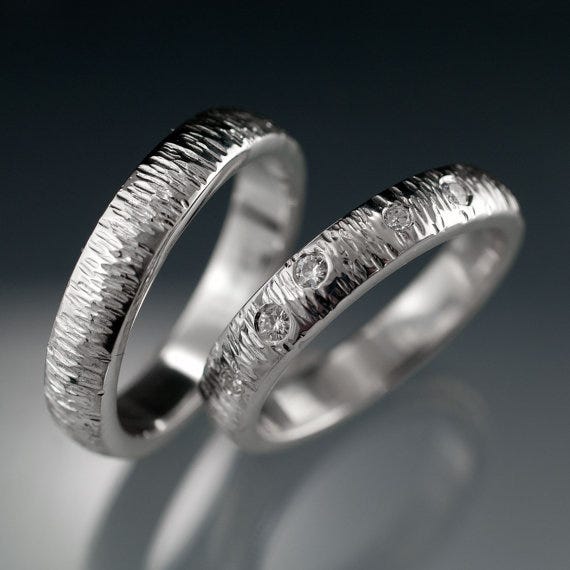 Classic metal rings tend to go well with solitaire engagement rings. However, a precious metal band can also provide a nice contrast to an encrusted or otherwise ornate engagement ring.

Meant to symbolize the everlasting nature of true love, eternity rings feature gemstones along the entire circumference of the band. Typically, these rings feature round cut stones, but as the example below shows, fancy cut stones are an alternative, and glamorous option. 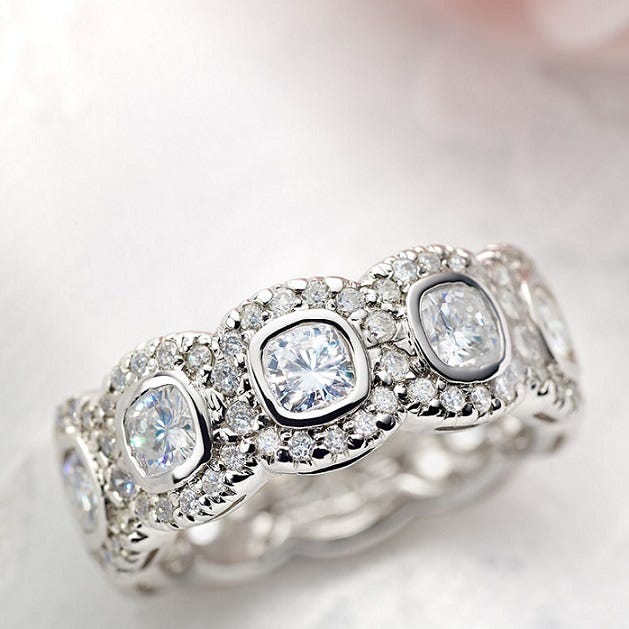 The gorgeous Britta eternity ring by Nathalie Betito of Venazia™ Haute-Couture, featuring both round and cushion cut moissanite stones 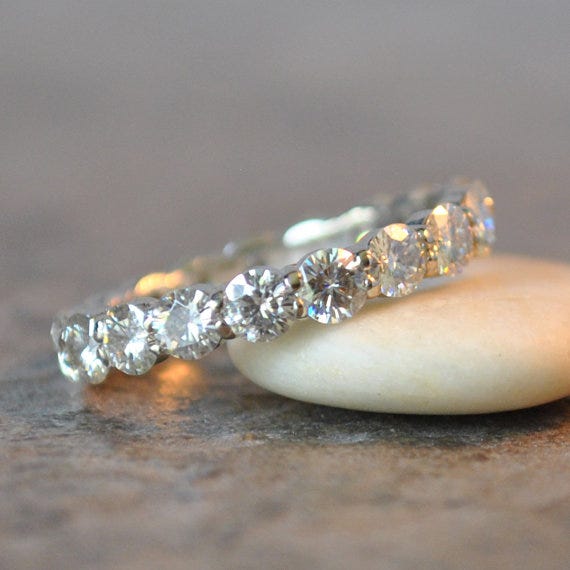 The Mercedes Forever Brilliant® Eternity Band by jhollywooddesigns on Etsy

Eternity bands are bright, eye-catching, and perfect for the bold bride to be! They can be paired with nearly every kind of engagement ring, but tend to go best with those that also have a bit of sparkle along the band.

Like eternity bands, anniversary rings feature stones on the band; however, they don’t continue all the way around. Since they include fewer stones, anniversary rings tend to be a bit more affordable than their eternity counterparts. Popular options for anniversary bands include quarter- and half-eternity styles. 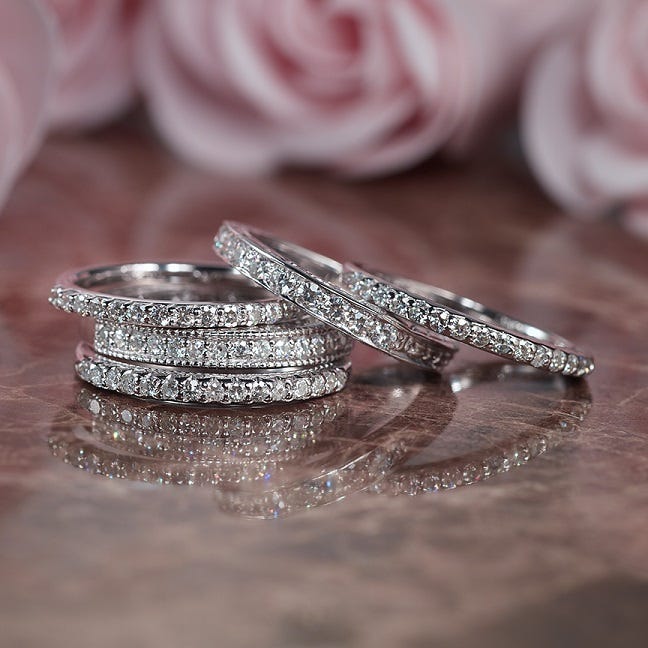 The stones on an anniversary or eternity band can be set in a number of ways. For example, a pavé band features individual stones set directly into the metal, creating an encrusted look. 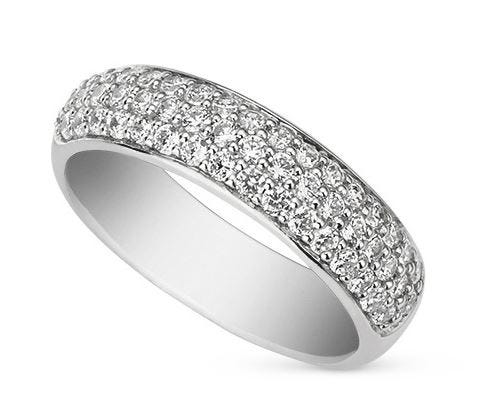 The Hebron ring, available on Moissanite.com, is an example of a pavé anniversary band.

In a channel-set band, the stones are set into the metal, but in a single, linear channel (hence the name). This creates a distinct “row” of stones within the band. 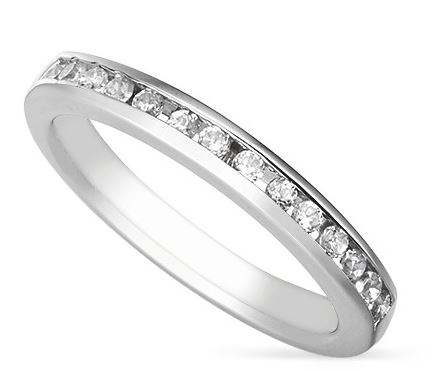 Pavé bands tend to pair well with traditional or vintage-style engagement rings, particularly those that feature pavé as well. Channel-set rings have a modern look that matches well with contemporary engagement rings.

Most wedding rings form a circle and are designed to run parallel to the band of an equally circular engagement band. However, if you have a unique engagement ring, you might need a curved or contoured wedding band to go with it, at least if you want the two to stay flush on your finger. 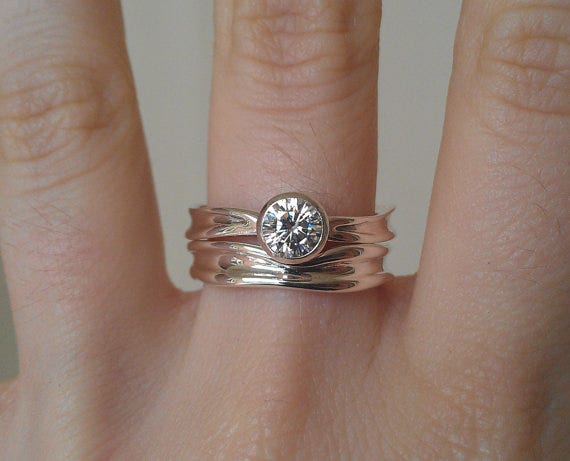 Engagement rings that tend to require a curved wedding ring are those with a tapered band (like the ring above) and those featuring asymmetrical center stones (such as heart or pear cuts). 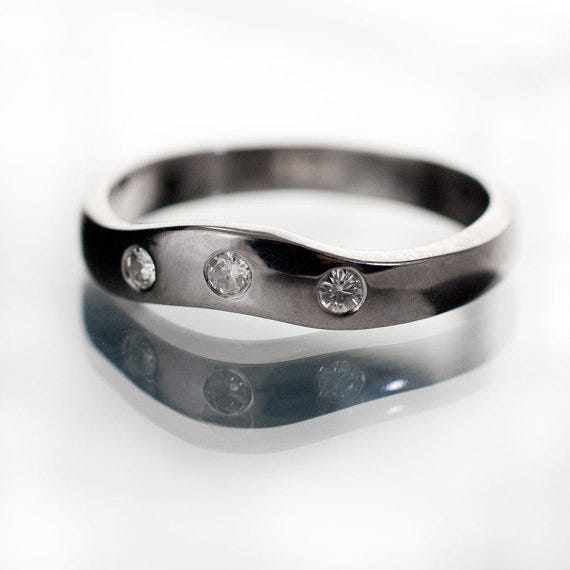 Luckily, there are as many varieties of curved wedding bands out there as there are traditional parallel ones. Plain metal, patterned metal, eternity, anniversary…the choice is yours!

What style of wedding band do you plan on getting when you tie the knot? Let us know in the comments.