Not sure if that ring you have is Art Nouveau- or Art Deco-inspired? Wondering about the difference between Victorian and Edwardian jewelry? Never fear! This overview will give you all the basics on the different style eras in jewelry history.

The Georgian Era was named for the four King Georges (George I – George IV) who ruled England from the 1710s to the 1830s. As you might expect, jewelry from this era, especially pieces in good condition, are quite rare. 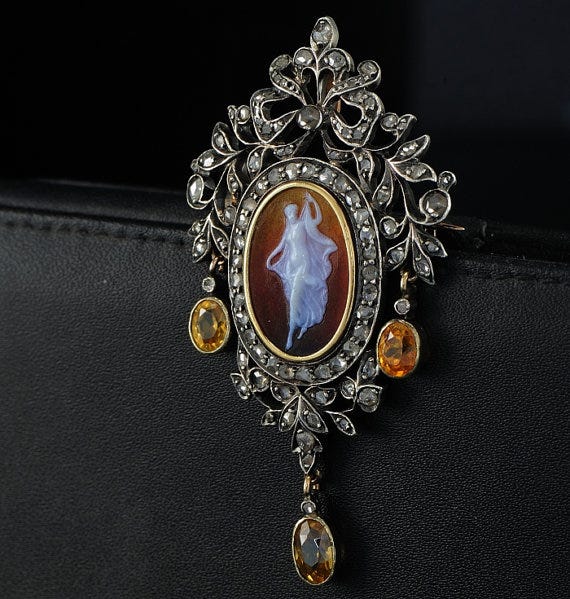 A major hallmark of Georgian jewelry is stones of varied shapes and sizes, often within a single piece. Cutting techniques were fairly primitive and stone sizes nonstandard. Jewelry was made to fit a particular stone, not the other way around. Often the stones were set with foil to bring out their sparkle and brilliance. Today, that’s done through advanced cutting techniques.

This period is named for Queen Victoria, who ruled England from 1837-1901.  Queen Victoria was a bit like Kate Middleton today – when she wore something, everyone wanted to wear the same thing!

When her husband Prince Albert passed away, she entered a period of deep mourning. This ushered in the popularity of mourning jewelry, often set with dark onyx and featuring macabre motifs such as skulls and skeletons. 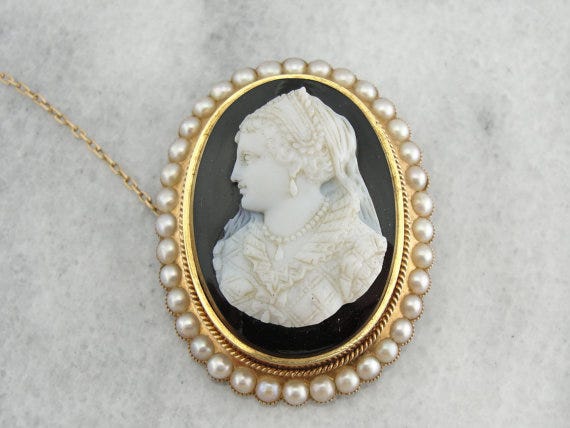 When the Queen’s mourning period came to an end, jewelry featuring lighter themes came into style. Flowers, animals, insects, and stars were some of the most used motifs.

The Art Nouveau period began in Europe and was short-lived but had a great impact around the globe. This movement rose after the Victorian influence began, and remained in place until 1914.  This mode of jewelry style was a revolt against the mass production of jewelry that was brought about by industrialization. Soft curves, fluid lines, and natural themes were the hallmarks of this style.  Common motifs were the female nude, butterflies, poppies, orchids, and dragonflies. 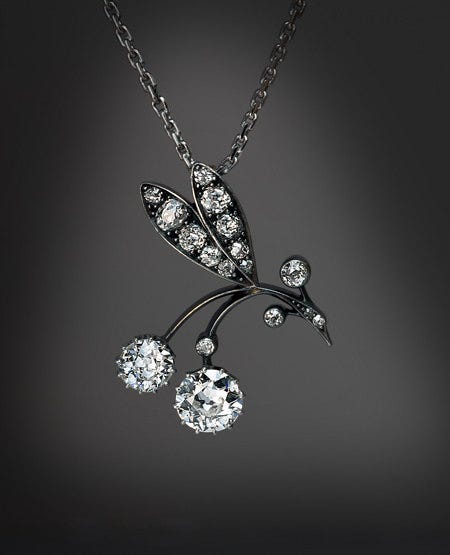 Hand-crafting techniques such as enameling became immensely popular during this period. Opal, agate, moonstone, and amber were among the most common gemstones used.

This style came into fashion after the Victorian Era but within the same timeframe as Art Nouveau began to influence fashion.  This era was named for Edward VII, Queen Victoria’s son, who began his reign after her death in 1901. It was during this time that platinum began to appear in jewelry. Due to its light weight and strength, platinum could be used to create airy, light, and highly detailed pieces. 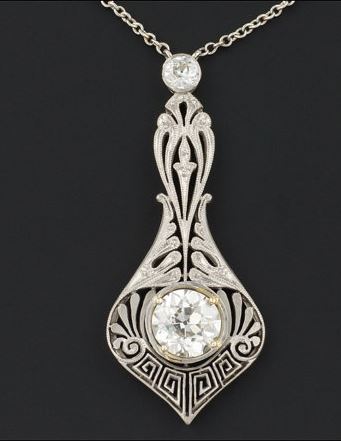 Diamonds also grew in popularity during this time, featured in intricate choker necklaces and lacy dangle earrings.  This period also saw the invention of the Milgrain technique, which creates a “beaded” look on the edges of jewelry settings. The Edwardian-inspired moissanite ring below features beautiful Milgrain details. 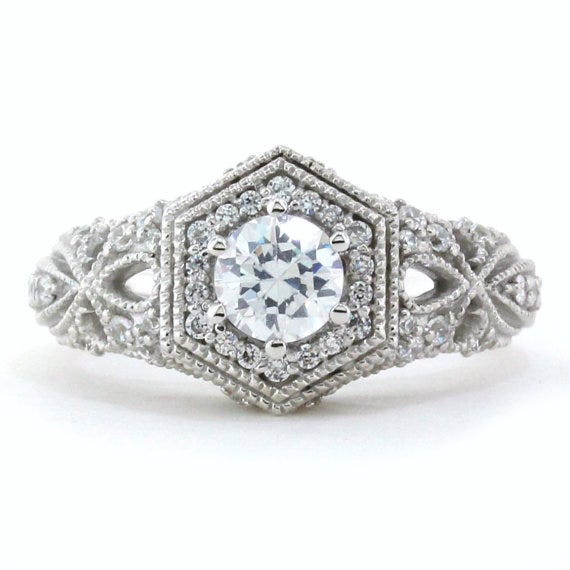 While the Art Nouveau movement was all about fluid lines and rounded edges, Art Deco which first appeared in France was focused on geometric shapes, clean lines, and symmetry. The main color of most jewelry was the white of platinum and diamond, although single accent colors also appeared in sapphire, emerald, and ruby. 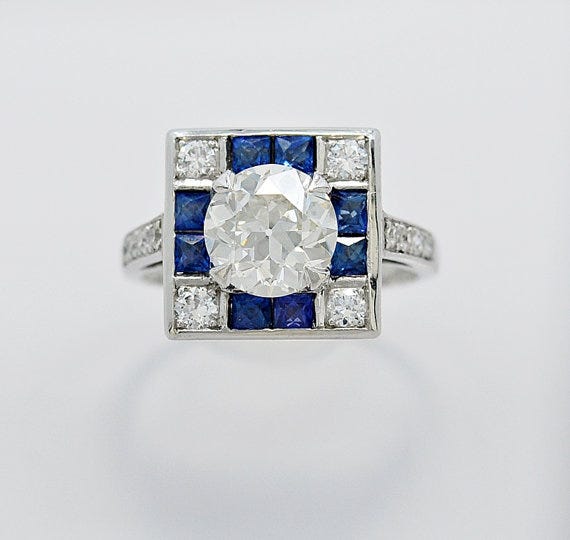 A popular Art Deco motif was the sunburst. It reflected the bold, bright attitudes of “The Roaring Twenties.” The contemporary ring below takes inspiration for the sunburst shapes of the Art Deco era. 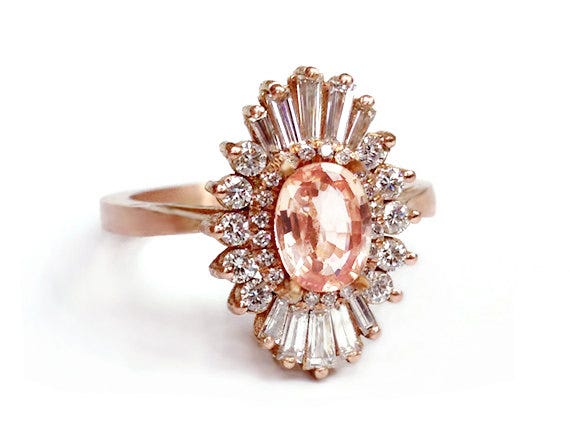 The Art Deco-inspired Lindy Ring by Heidi Gibson, from $1,850 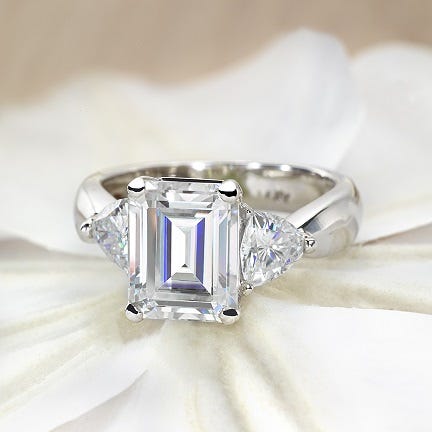 Nathalie Betito of Venazia™ Haute-Couture draws inspiration from the Art Deco era. Her geometric Camarie ring is a prime example

Big and bold was the name of the game during the Retro period. This was the time of cocktail rings and statement necklaces.  Styles inspired by the glamour and glitz of Hollywood were extremely popular.  Diamonds and platinum, however, decreased in popularity during this time. Large gems of amethyst, citrine, and topaz set in gold were the new standard. 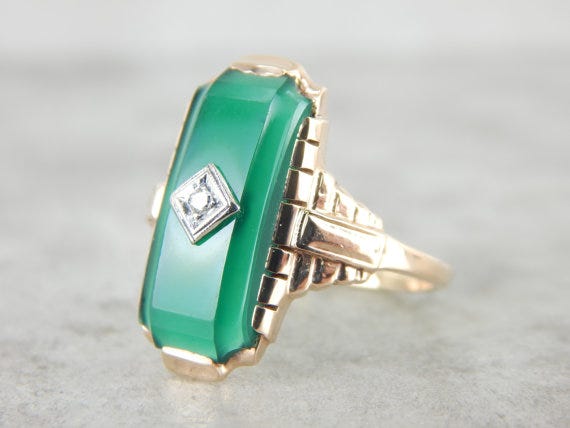 The jewelry styles of the forties, fifties, and sixties were heavily influenced by the Modernist movement. Shapes and motifs inspired by science and space exploration appeared in jewelry.  Animal designs became extremely detailed, and colored stones grew in use and popularity. Many mid-century pieces were bold and bright, and drew the eye with textured metals and jagged lines. 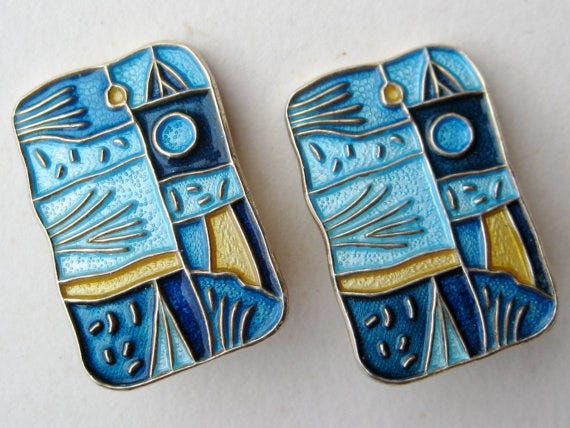 This period spans everything from the 1970s to today! Contemporary jewelry styles are wide and varied, and many take inspiration for the materials, techniques, motifs, and styles of past eras. 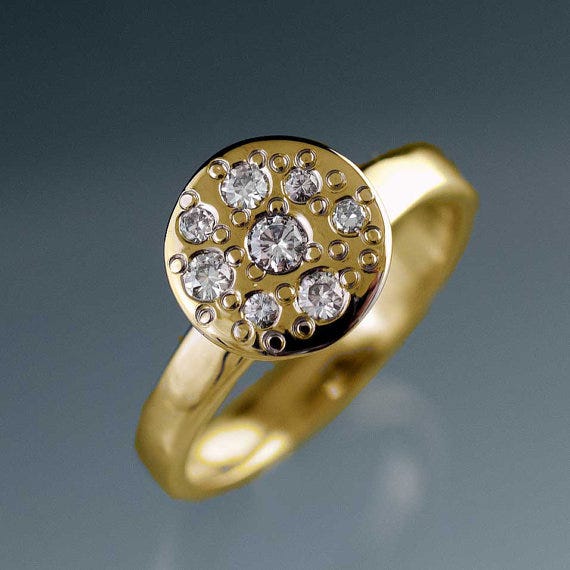